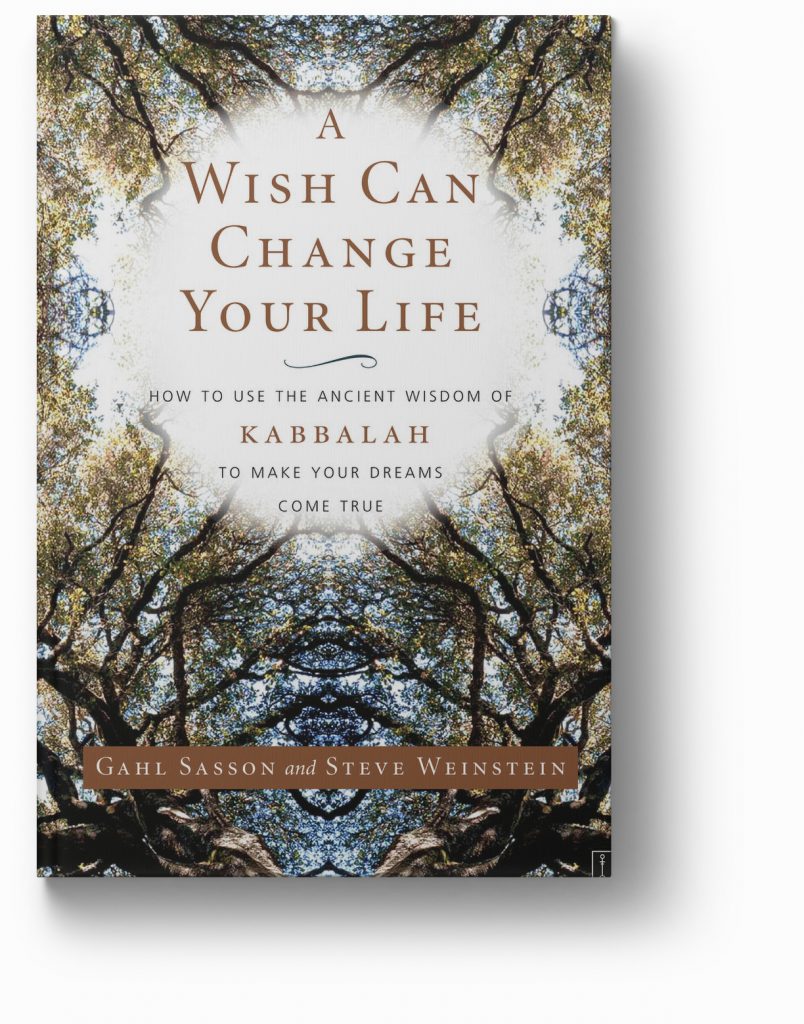 Books / A Wish Can Change Your Life

A Wish Can Change Your Life

A Wish Can Change Your Life by Gahl Sasson and Steve Weinstein is an engaging, innovative approach to Kabbalah-the ancient teachings of Jewish mysticism-that integrates mythology, scholarship, and practical exercises in a ten-week program designed to bring both material and spiritual gratification to readers of any faith.

Available on both Kindle and Paperback

Blending wisdom from traditions and cultures all over the globe into an unprecedented metaphysical mosaic, A Wish Can Change Your Life lays out the essential tools and strategies for attaining our worldly goals while simultaneously fostering spiritual enrichment and peace of mind. The book shows you how to tap the archetypal energies of the Kabbalistic Tree of Life-the eternal structure that created and animates everything in the universe-to fulfill any wish, whether it is for material gain (a new car, a higher salary), personal improvement and pleasure (weight loss, a more creative career, heightened intimacy with a partner), or a life-changing message from God.

A Brief History of "A Wish Can Change Your Life"

“A Wish Can Change Your Life” by Gahl Sasson and Steve Weinstein has enjoyed a long and enchanting history. It all started when Gahl visited Mexico. He originally traveled there from his home in Israel to surf with three of his friends. In Hebrew, the name Gahl means a wave, and what better way for a wave to find his true calling and identity if not through surfing. After a month and a half of riding the waves, Gahl found himself in Guadalajara, Mexico, standing at a junction: should he go back to Israel and continue his graduate studies in psychology or should he explore Central America? After a series of synchronicities and encounters with several amazing people, it became clear that life wanted him to stay in Guadalajara. Soon Gahl found himself in a rock band called Sirius, named for the brightest star in the sky, and performing in nightclubs all around the city. One day, the guitar player in the band insisted that Gahl pay a visit to an esoteric school called Circulo Dorado, which was founded and led by Jorge and Alejandra Najera. Gahl’s encounter with the Najeras sparked a long and close relationship. They became his spiritual parents and introduced him to Kabbalah, astrology and symbolism. Later on, as Gahl deepened his study of Kabbalah, he discovered that the Zohar, which is perhaps the most influential text in the canon of Kabbalah, had been written in Guadalajara, Spain. And it was in Mexico and in the language of Spain, that Gahl, an Israeli fluent in Hebrew, was introduced to the secret teachings of the Hebrew Kabbalah. Isn’t life full of surprises?

After settling in Los Angeles in 1997, Gahl began teaching workshops in astrology. One day in the summer of 1998 he was sitting at a coffee shop in the San Fernando Valley with Mali, a nice Taurus, who wanted to promote Gahl’s music. The woman had just finished taking the astrology class, and she said that the whole group had become accustomed to meeting together every Wednesday and wanted to continue studying spirituality. She then asked, “Why not teach a class on Kabbalah?” Gahl could not come up with a satisfactory rebuttal, and he decided to start a 10-week workshop focusing each week on a different archetypal energy of the Kabbalistic Tree of Life. The classes on Kabbalah slowly evolved and grew in popularity. The format of the workshop transformed into the shape of a journey in which individuals used the ten spheres of the Tree of Life to fulfill their wishes and dreams. The classes also began to include storytelling both personal and mythological, Hebrew chanting, numerology and work with colors. In 1999, Gahl discovered one of the greatest hidden treasures in Los Angeles—an organic coffeehouse called Urth Café.

Steve Weinstein wrote for the Los Angeles Times for 12 years and had been drinking coffee almost daily at the Urth Café since the moment the place opened in 1995. They say that mathematicians are machines that transform coffee into formulas, it has to be true also for writers. After covering the TV and film industry for the Times for more than a decade, Steve began to feel stagnant and trivial, weary of the seemingly repetitive tales and travails of sitcom producers and movie stars. He found himself hungering to write about something more substantive, something more personal. Determined to hunt out good, meaningful stories, he started writing his own movie scripts and freelanced articles for various magazines.

A few months before New Year’s Day, 2000, Steve was sipping coffee as usual and he saw a flyer on the bulletin board of the Urth Café, advertising an astrology lecture on Y2K by Gahl Sasson. He had seen Gahl around the cafe, reading astrology charts and speaking in Hebrew to other people, and he’d been told that Gahl was a rather astute astrologer. By then, the hysteria over the coming new millennium and its potential for computer meltdowns and even apocalypse had reached a fevered plateau, and so Steve decided to check out the lecture. What impressed him was not so much the astrological implications of year 2000, but the way Gahl interwove mythological references from cultures across the globe. He spoke of the Biblical flood of Noah and the flood from the Babylonia epic of Gilgamesh, the Hindu trinity of Brahma, Vishnu and Shiva and the Christian Father, Son and the Holy Ghost. He illustrated the intersection and commonality in the stories of the Norse god Odin, the Phrygian savior god Attis, and Jesus Christ of Nazareth. At that point, Steve had been studying Kabbalah and meditation for several years, taking classes from various rabbis and reading dozens of books on his own, but the exclusively Jewish orientation of most of these sources left him wanting more. Gahl’s inclusive and integrated approach to spirituality both moved and intrigued him. It tapped Steve’s instinctive belief that spirituality should unite rather than separate. And he decided to sign up for Gahl’s workshop on the Tree of Life, which was held each Monday at the Golden Bridge Yoga Center, one of the leading Kundalini yoga studios in the world.

By then, more and more of Gahl’s students were pestering him to recommend a book on Kabbalah that featured and elaborated upon all the information he presented in the workshops. Though Gahl admired and referenced a few books about Kabbalah that had been published, none integrated the multicultural and multi-mythological approach that he knew best captured the spirit of this marvelous ancient lore. When pressed for an appropriate recommendation, Gahl often joked, “such a book is yet to be written.” That joke soon turned into a serious matter.

During the ten-week workshop, Steve pitched a story about Gahl and his classes to Glue magazine, a hip, LA fashion publication. That article was published in the spring of 2000. Gahl read the piece and was rather taken by Steve’s unique, entertaining and yet informative style. At a Passover meal, Gahl showed the magazine to his friend Belinda, who is an accomplished writer herself. After reading the article she said, “This guy knows the craft.” At the Seder table, as the host filled the grail of Elijah with red wine, Gahl had a revelation: Steve should be the co-author of a book based on the class. Steve would be able to translate all of my crazy ideas and associations into a comprehensive, easy-to-follow manuscript about the Tree of Life.

Steve and Gahl met the following week and decided to work together on the project. They recorded several sets of classes and documented countless student’s personal experiences with the workshops and the archetypal energies of the universe. Steve sweated and toiled at his laptop to rewrite and organize it all into a readable book. The work was monumental. The amount of information collected was enough to fill many thick volumes. After completing a chapter draft, Steve would e-mail it to Gahl, who then pored over the material, added stories, associations, research, esoteric tidbits, etc. It became a tennis game between Steve and Gahl played over the Internet. Steve would send e-mails with subject lines such as “Try to cut out as much as you can!!!” only to receive replies loaded with new ideas and “Absolutely essential info” typed in the subject lines.

One fortunate day, after much of the book was finished, Steve presented the proposal to Elizabeth Miles, a good friend as well as the author of several books including, “Tune Your Brain” and “The Feng Shui Cookbook.” Elizabeth loved the book, offered several critical suggestions that helped to spice up the proposal and then passed it along to her own literary agent, Betsy Amster. Betsy too loved the project, and after requesting a few revisions, she agreed to represent it in the wild forest of book publishing. Less than a month later, Simon and Schuster agreed to publish the book. Then the really hard work commenced. The editor, Caroline Sutton, wanted more then 25% of the manuscript cut away to make the final product a breezier read and to keep the retail cost of the book down. One day, overwhelmed by a task he thought he’d completed, Steve went out jogging to clear his head and accidentally ran into the spear-like branch of a tree, gouging a chunk of skin from his shoulder. “Here I thought trees were my best friends,” Steve said. “I wrote a whole book about the glory and magic of trees. And yet they are attacking me everywhere I go.” It was a severe lesson, but with Gahl’s guidance, Steve remembered that Severity is the archetype of cutting and editing. The jogging mishap suggested that the Tree of Life needed some editing, and Steve buckled down in the summer of 2002 and eventually succeeded in harnessing all the information of the Tree of Life into a 288-page book. Caroline and Simon & Schuster accepted the new version word for word. And thus was born “A Wish Can Change Your Life.”

Then came the question of securing an endorsement for the book. For Gahl, the Dalai Lama had long stood as the highest living authority on mysticism and spirituality. Though he did not know anyone at the office of His Holiness the 14th Dalai Lama, Gahl sent an e-mail to India with the book attached, asking for the blessing of His Holiness. Gahl suspected that the chances for success were slim, but he also knew that the Dalai Lama is a manifestation of Avalokiteshvara—the legendary Buddha of Compassion, who has 1,000 arms and 11 heads. Gahl wished that perhaps one of those 1,000 arms would find the time to write an endorsement and bless both the book and the readers. A week went by and Gahl received an email from the Tibetan Office, apologizing in the name of His Holiness. The note read that the Dalai Lama simply could not comply with all the thousands of requests for blessings and endorsements that he receives every day. Gahl felt disappointed but somehow a ray of hope shone still. After all, a wish can change your life, and the appeal for an endorsement represented an authentic and heartfelt Wish. A few months later, Gahl received a shocking and glorious new e-mail from the Dalai Lama, complete with an endorsement and a short personal note: 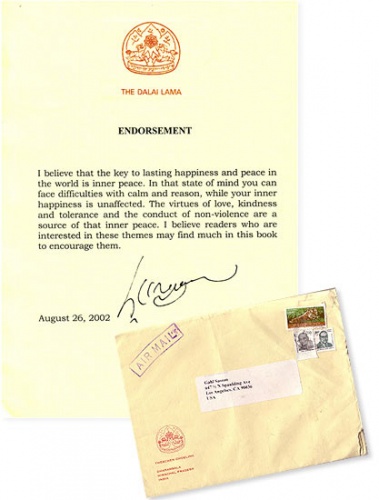 Please find attached here His Holiness’s endorsement for your book. Can you please send us your postal address and fax number so that we could send you the original signed copy?

Two weeks later, the hard copy of the endorsement arrived. You can view it on the first page of the book.This is how the journey of “A Wish Can Change Your Life” began – with a wish.

This is also how the journey to your own wish fulfilled can begin.